The A. Wade Smith and Elsie Moore Memorial Lecture on Race Relations is the only endowed lecture at any college or university with a rich over-20-year history featuring renowned scholarly experts on race relations. The lecture was established in 1995 to perpetuate Wade’s tireless efforts to improve race relations across Arizona State University campuses and within the greater community.

With the passing of Wade’s spouse, Elsie Moore, who founded the lecture and was director and professor in the School of Social Transformation, we have renamed the lecture in her honor, as the A. Wade Smith and Elsie Moore Memorial Lecture on Race Relations.

Elsie was a beloved faculty member and pioneer in diversity, equity and inclusion. Her vast body of research addressed inequities in educational settings and ensured justice and equality for students of color. Both Wade and Elsie devoted their lives to the idea of racial parity. Today we continue that work by honoring their legacy. 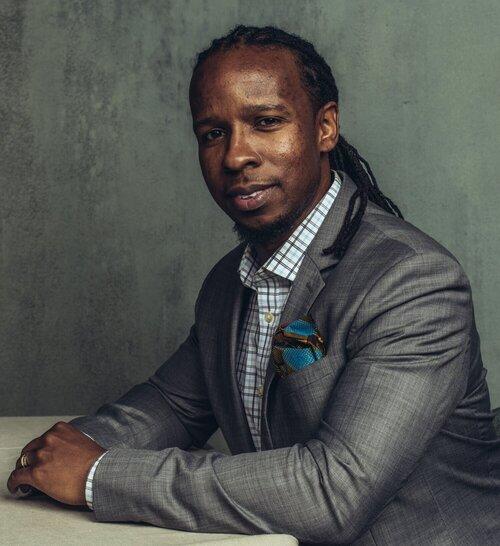 Ibram X. Kendi is the Andrew W. Mellon Professor in the Humanities at Boston University, and the founding director of the Boston University Center for Antiracist Research. He is a contributing writer at The Atlantic and a CBS News racial justice contributor.

Kendi is the author of many highly acclaimed books including "Stamped from the Beginning: The Definitive History of Racist Ideas in America," which won the National Book Award for Nonfiction, making him the youngest author to win that award. He had also produced five #1 New York Times bestsellers, including "How to Be an Antiracist"; "Stamped: Racism, Antiracism, and You," co-authored with Jason Reynolds; and "Antiracist Baby," illustrated by Ashley Lukashevsky. In 2020, Time magazine named Kendi one of the 100 Most Influential People in the world. He was awarded a 2021 MacArthur Fellowship, popularly known as the Genius Grant. His latest two books were the instant New York Times bestsellers, "How to Raise an Antiracist" and the picture book, "Goodnight Racism."

2020 April Ryan, White House correspondent and CNN political analyst, has a unique vantage point as the only black female reporter covering urban issues from the White House – a position she has held since the Clinton era.

2018 Isabel Wilkerson, journalist and author of The Warmth of Other Suns: The Epic Story of America’s Great Migration. Wilkerson won the Pulitzer Prize for her work as Chicago Bureau Chief of The New York Times in 1994, making her the first black woman in the history of American journalism to win a Pulitzer Prize and the first African American to win for individual reporting.

2017 Dr. Aldon Morris, the Leon Forrest Professor of Sociology and African American Studies at Northwestern University, spoke about scholarship and activism while focusing on the lessons of W. E. B. Du Bois.

2016 Dr. Eddie S. Glaude Jr., the William S. Tod Professor of Religion and African American Studies at Princeton University, offered a critical and insightful view on the problems currently facing black America at the 21st annual A. Wade Smith Memorial Lecture on Race Relations. Glaude is widely regarded as one of the most important black intellectuals in the United States.

2015 Dr. Walter R. Allen, distinguished professor of education and sociology at UCLA, discussed the policing of African-American men on college campuses at the 20th annual A. Wade Smith Memorial Lecture on Race Relations. Allen earned his doctorate and master's degree from the University of Chicago in sociology and his bachelor's degree in sociology at Beloit College in Wisconsin. Allen has done extensive research on higher education, race and ethnicity, family patterns, social inequality and the African diaspora.

2014 Lani Guinier, civil rights attorney and first tenured African-American woman professor at Harvard. Lani Guinier, the Bennett Boskey Professor of Law, became the first African-American female tenured professor at Harvard Law School when she joined the faculty there in 1998. She was on the faculty of the University of Pennsylvania Law School for 10 years before coming to Harvard. She has used her public platform to write five books, including her most recent book "The Miner's Canary," co-authored with Gerald Torres. She co-founded the Racetalks Initiative, a research and public education project that seeks to develop new interdisciplinary paradigms for linking racial and gender justice to the project of building more inclusive institutions.

2013 Danny Glover, actor, producer and humanitarian Danny Glover has been a commanding presence on screen, stage and television for more than 25 years. As an actor, his film credits range from the blockbuster “Lethal Weapon” franchise, the critically-acclaimed “Dreamgirls,” “The Color Purple” and the futuristic “2012” to smaller independent features, some of which Glover has produced.

2011 Walter Mosley, best known for Devil in a Blue Dress and other popular mysteries featuring detective Easy Rawlins;  one of the most powerful and prolific writers working today in any genre; author of more than 35 books, ranging from the crime novel to literary fiction, nonfiction, political essay, young adult and science fiction.
Topic: "The Only True Race is the Human Race" (April 5, 2011)

2010 Dr. Kimberlé Crenshaw, Professor of law at UCLA and Columbia University, co-founder of the African American Policy Forum and leading authority in the area of civil rights, Black feminist theory, and race, racism, and the law.
Topic: “Educating All Our Children: A Constitutional Perspective” (April 8, 2010)

The A.Wade Smith and Elsie Moore Community Award for the Advancement of Race Relations was created in 2005 and is given to an individual who demonstrates a passion for race relations and a concern for building a better world and who works in the community to advance race relations in Arizona.