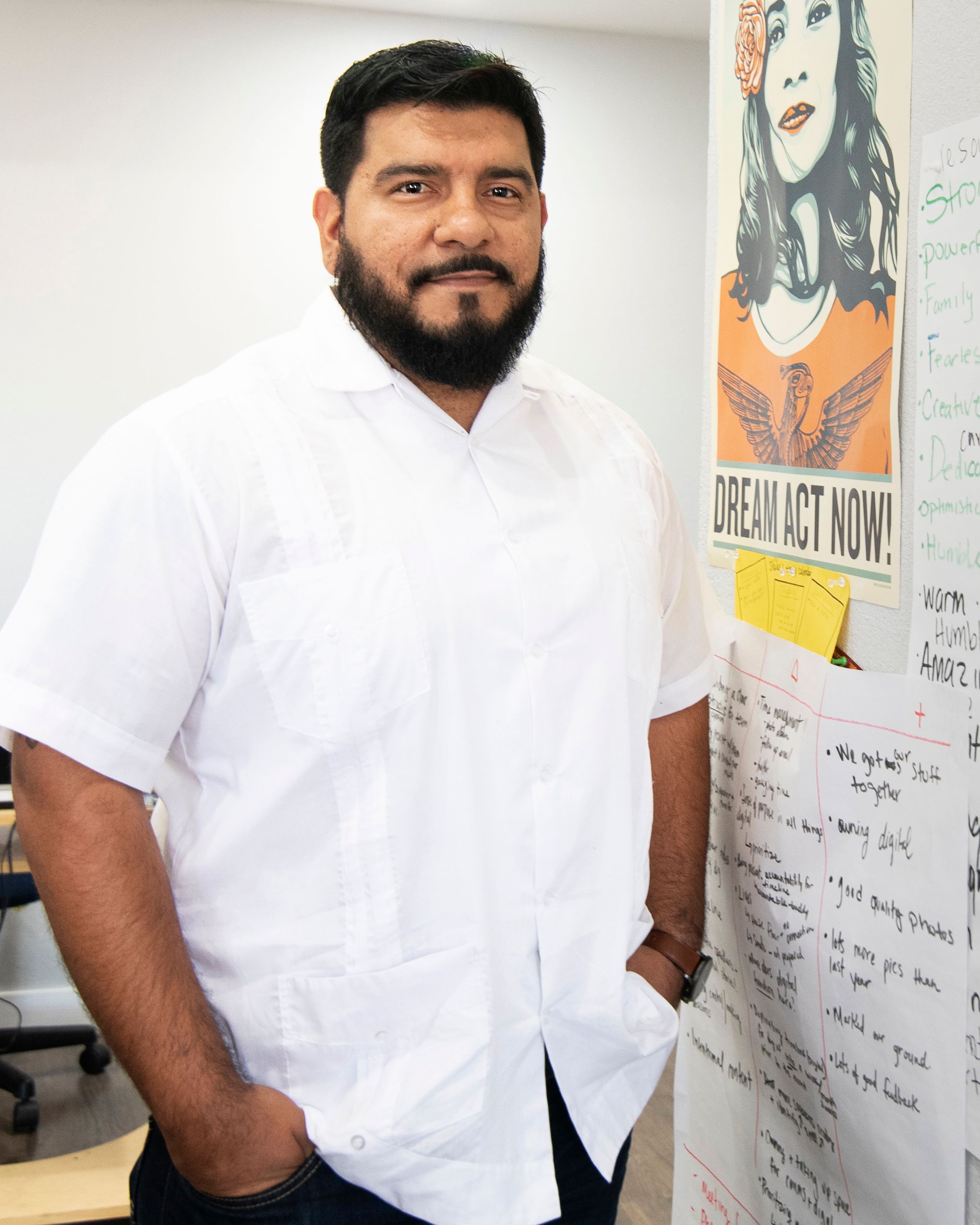 In 2010, Tomas Robles found himself in Phoenix with an accounting job he didn’t love and what felt like a troubling political tide he was powerless to impact.

It had been almost a decade since, at 19, the 9/11 attacks prompted him to leave his freshman year at Arizona State University to enlist in the U.S. Marine Corps.

For Robles, the decision was a visceral reaction that he said changed his life’s trajectory entirely. After five years of military service, returning home to Arizona triggered a similar response.

“There was a lot of fear over the economy, but also a lot of scapegoating, especially toward immigrants,” he said. “Then Gov. Jan Brewer passed SB1070, and it sent that bolt of lightning through my body all over again.”

The son of Mexican immigrants, Robles was born in Tucson and grew up in Phoenix. The new policies stood to affect his own community. And they left him wanting to effect change in ways that didn’t seem possible with the accounting degree he’d earned after the military.

The feeling drove his return to ASU, where the School of Transborder Studies at The College of Liberal Arts and Sciences checked many of the boxes he envisioned.

“I wanted to join a program that offered education about our history in the way I needed it, while also enabling me to organize in my community by meeting people with the same passion for social justice,” he said.

Robles graduated with a bachelor’s degree in transborder studies in 2011 and continued to work in local advocacy projects before finding LUCHA AZ, then a budding network also founded in the wake of SB1070.

Since taking the helm as executive director in 2013, Robles has transformed the organization into a multifaceted advocacy vehicle led by local youth tackling issues around immigration, incarceration and voter access.

Now co-directing the group with fellow ASU alumna Alejandra Gomez, he’s helping a new generation realize their own potential to make an impact.

Today, LUCHA boasts an office in Phoenix and Tucson, 26 employees and some 2,600 dues-paying members whose donations allow them to help decide the public policy stances of the organization and access to immigration support services. Robles estimated they have also registered close to 100,000 new Arizona voters.

Simply put, he said the group rallies around the causes important to communities sometimes cast into the shadows.

“LUCHA seeks to change the state of Arizona to a place that is more accessible to working families,” he said. “That includes young people, single women, immigrants and people of color — we want to create a state that we feel better represents all of us.”

He answered a few questions about his ASU journey, his time after graduation and how young activists can impact public policy now.

Question: What brought you to LUCHA?

Answer: I came to LUCHA from an organizing position at the Cesar Chavez Foundation in Phoenix after graduation. It was a dream and an honor to work for the foundation that Chavez himself helped build, but the bureaucracy did not allow me the freedom to create new programs or the means to effect change as quickly as I’d hoped.

While LUCHA didn’t have the same name recognition, budget or staff, we did have the ability to dream big and build an organization within the framework of the issues we are facing right now.

My first assignment here was actually what landed me the job. LUCHA’s director at the time asked me to write a campaign plan to win a budget override proposal for Phoenix schools, which usually means property taxes are raised in the local community and the extra money goes directly to the schools. We were expected to lose that campaign, but with the plan I wrote, we ended up winning by just 87 votes. That led to $21 million additional funds going to all nine high schools in the Phoenix Union district.

Q: A lot of LUCHA’s initiatives today are led by high school and college activists. How does that affect the organization?

A: It's totally by design. We believe that youth create, lead and accomplish movements. If we train and engage with high school students, they will in turn have the passion, education, expertise and energy to go out and help change the state. In any given day, you'll see between 10 and 20 students here taking political education classes, creating art for a demonstration or just spending time after school in a place where they feel welcome and comfortable among their peers. Almost every single employee that works for LUCHA today started as a volunteer, so many stay on and continue to develop.

Q: How would you describe your Sun Devil story?

A: Without the School of Transborder Studies, I'd probably still be looking at accounting spreadsheets and looking outside the window wishing I was somewhere else. I think my experience is a perfect example of how finding the right school at ASU can make you feel empowered to impact whatever you think is important in the world.

Because of its size, the school had this sense of family and togetherness that felt very genuine. It also helped me personally that the director at the time was Carlos Velez-Ibanez, who is also a former Marine. We really connected not just about both growing up in the Southwest as Mexican Americans, but also on the experience of joining the military and coming back.

I think those aspects really solidified my passion and helped me see different ways to effect change in my community.

Q: Are there any other professors that stick out in your mind?

A: So many. Classes taught by Edward Escobar about the history of labor and political movements in the U.S. really impacted me, while Marivel Danielson helped showcase advocacy through a woman of color's perspective. That was the first place I got to be privy to that viewpoint, and I think it’s hugely important when participating in social movements because you have to be able to open your eyes to a lot of different struggles.

Eileen McConnell spoke to the stat and math nerd in me, and Lisa Magana was the first one to discover the work that I was doing outside of the classroom to register voters in south Phoenix and educate people about SB1070. I was doing 60-hour weeks in addition to going to school, and at 28, I was an older student who was a little disconnected from other students. She saw an interview about my work and began talking about it at the school, which really helped me feel more involved.

Q: What advice would you give to new students or what do you wish you had known?

A: Take as many different courses as possible, even if they don’t fit with your major, because that’s how you discover what you love. I took my first course in the School of Transborder Studies when I was a mechanical engineering major and it changed everything.

Secondly, don't take a loan unless you really have to, because you'll need to pay that money back, with interest. Thirdly, get involved and take advantage of your ASU network. College is immensely valuable on its own, but there is nothing more valuable than the people you meet while you're there. So go to as many functions and meet as many people as you can. Get out and engage in different organizations. That will go a long way once you start your career.

Finally, chase a passion, not a paycheck. This is such a cliche, but it really is true. You'll never feel like you’re working a day in your life if what you do and what you love are the same thing.

Q: What are some of your most important milestones since graduation, both personally and for LUCHA?

A: I go back to the young people we are lucky to help here. We have a communications director who is a DACA student. We have another student who started as an intern and is now an organizing director.

Not only are these young people still with the organization after internships and volunteering, they have prominent roles and are the ones who will take over once co-executive director Alejandra Gomez and I step away.

We try to have this space feel like family, similar to the School of Transborder Studies actually, so that everyone feels welcome. Growing up, I didn't know about any organization like this and frankly, I don’t think anything existed. These young people are so much further ahead because they have these places.

There is no greater sense of accomplishment for me than seeing them grow and become leaders of their communities, because you know you had a part in their finding that voice. They are the reason this organization is so successful. I really don't know if there's a replacement for that feeling.