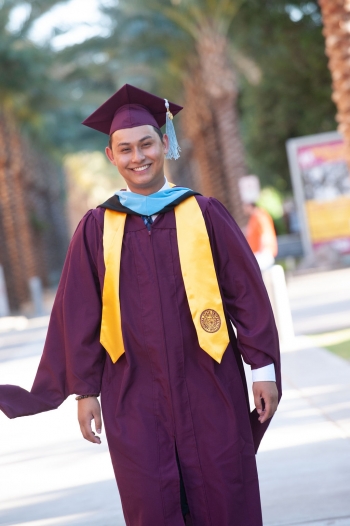 In the last four years, Lennon Audrain has earned an associate degree in elementary education from Rio Salado College, a bachelor’s degree in classics (concentrating in Latin) from The College of Liberal Arts and Sciences at Arizona State University, and a master’s degree in curriculum and instruction from ASU’s Mary Lou Fulton Teachers College.

But that’s not all: This semester, he’ll graduate with a second master’s degree in technology and education from Harvard University. And this fall, he’ll return to ASU to pursue his PhD in education policy. Audrain’s resume would be impressive for any individual, but it’s particularly striking because he is only 20 years old.

Audrain said his motivation to excel academically stems from the support he received from his parents, both Sun Devils themselves.

“My dad and mom met at ASU,” he said. “My mom grew up in Thailand, and she came here to get her degree in accounting from ASU. And my dad got his bachelor’s degree in agribusiness, also from ASU.”

Growing up, Audrain was part of an interfaith household — his mom is Buddhist while his dad is Catholic.

“My whole life, I was bouncing between those religions,” he said. “I think part of what made me a '

high achiever’ is the multiple perspectives on life that I got from that.”

While his parent’s support has helped him in his academic success, Audrain also credits his own persistence, which began in high school while he was attending Brophy College Preparatory in central Phoenix.

At the same time as he was going to school at Brophy, Audrain enrolled in classes at Rio Salado College with the goal of earning an associate degree in elementary education before he graduated high school.

“That meant I had to do field experiences in real classrooms in addition to my coursework at Brophy,” he said. “I ended up being awarded my degree five months before graduating from high school. Since I had 64 credits walking into ASU, and since I knew I wanted to teach Latin, I decided that I was going to be a Latin major.”

After graduating from Brophy and Rio Salado, Audrain came to ASU, where he was able to earn his bachelor’s degree in classics from The College’s School of International Letters and Cultures.

“I started taking Latin (at ASU) because I thought I was going to be a priest,” he said. “And I was like, ‘I had such a great Latin teacher at Brophy, and I knew education is what I want to do — why not continue studying it at ASU and we’ll see where it takes me?’”

Audrain said he’s grateful ASU offers a curriculum, like that found in the School of International Letters and Cultures, that focuses on the importance of language.

“I’m really happy that ASU has a classics department, and I think they need to continue to have one,” he said. “It plays an important role in how we think about the development of our civilization and of the United States.”

After graduating from The College, Audrain continued his pattern of balancing multiple responsibilities and interests, this time taking his passion for education and language to Harvard, where he also currently teaches Latin and Spanish at a local high school.

Audrain has his next academic plans figured out — returning to ASU for his doctoral degree — but said his plans for the future are unwritten.

“I would love to someday be the national director of Educators Rising, I think that’d be a really sweet gig,” he said. “But honestly, I’m just really excited to see where all of this takes me.”

With the many opportunities Audrain has had a chance to experience over the last few years, he’s learned a thing or two about the importance of support and offers this advice to new and current undergraduate students: “Find your team — the individuals who will mentor and support you throughout your academic and work journey — and don't be afraid to ask for help from them. The worst they could say is ‘No.’”

Audrain has gained substantial knowledge in the classroom, but some of the insight he’s found most valuable has come from the relationships he’s built in and out of the classroom.

“It’s the people around you that will be invaluable in helping you to answer questions and to create solutions to the most pressing problems,” he said.